What are the types of solenoid valves?

A direct-acting solenoid valve indicates that the design utilizes the magnetically responsive, sliding plunger to open or close the main media flow path through the valve. In other words, the movement of the control tube element in response to the generated electromagnetic field directly acts to open or close the valve.

This solenoid valve design incorporates the actuation of the valve into the valve itself without the need for a separate electric or pneumatic actuator to stroke the unit open or closed. This allows for a more compact design than most separately actuated alternatives. A 2-way, direct-acting solenoid valve has two optional configurations: either normally open or normally closed.

In the normally closed version of a solenoid, the seat on the sliding member, with the assistance of a spring to hold it in place, sits against the orifice keeping the flow path closed when in this de-energized, or normal, state. When energized, the pull of the magnetic field on the magnetized sliding member overcomes the resistant spring force, and the seat lifts from the orifice to open the flow path. When once again de-energized, the spring returns the valve to the normally closed position. 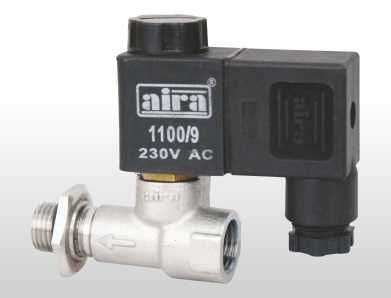 Bistable solenoids, also referred to as latching or 12v solenoid valve, operate on a similar principle, though they do not utilize a spring to return the sliding member to its initial position. Instead, this design uses permanent magnets in lieu of a spring to hold the ferromagnetic sliding member in place when de-energized.

The pull of the magnetic field generated by the energized state of the solenoid proves stronger than the pull of the magnetic force of the permanent magnet holding the plunger in its initial position. When energized, the pull of the electromagnetic field lifts the sliding member from its initial position pulling it to a secondary posture. However, when once again de-energized, an additional permanent magnet holds the sliding member in this secondary position.

In order to return the sliding member to its initial location, one must energize the coil by specifically running the current in the opposite direction, which will reverse the polarity of the generated magnetic field and thus pull the sliding member from its secondary posture back to its initial position. When again de-energized, the first permanent magnet once more holds the plunger in this initial location. This action of technically switching between two stable, de-energized positions gives rise to the term switching or bi-stable solenoid valve.